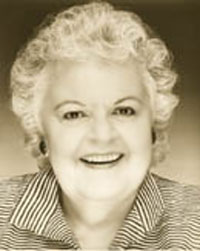 As a member of the New York-based folk group the Weavers, American folk singer Ronnie Gilbert’s voice on the song Goodnight Irene led the group, consisting of Pete Seeger, Lee Hays and Fred Hellerman, to the top of the music charts in 1950.

But the group’s song choices and political sympathies brought them attention from the FBI, and they were blacklisted as a result of the FBI’s relentless anti-communist campaign.

Ms. Gilbert’s joyful contralto voice established a blueprint for folkgroups, encouraging audiences to sing along while Gilbert acted as a mentor for female singers.

Their pursuit by the FBI haunted their performances and the Weavers disbanded in 1953.

But in 1955 they reunited for a sold-out concert at Carnegie Hall in New York. Mary Travers was in the audience. She was inspired by Gilbert’s powerful voice, and with Ronnie Gilbert as her mentor she would go on to sing with one of the greatest folk groups of the century, Peter, Paul and Mary.

After the Weavers, Ms. Gilbert combined solo singing with acting, and in the 1970s she trained as a therapist and gained a degree in psychology.