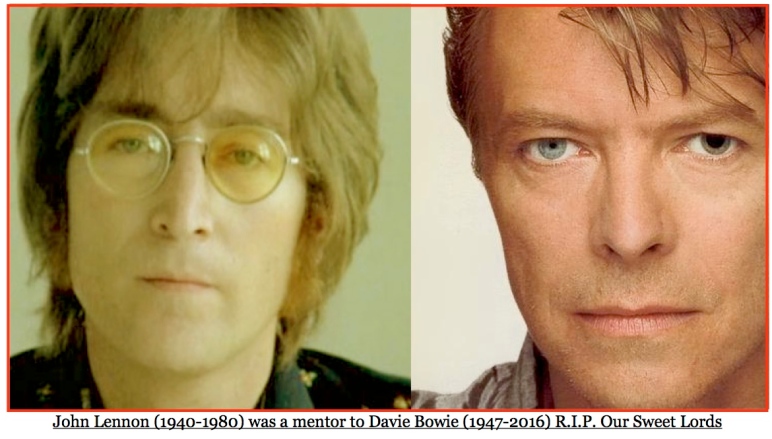 “It’s impossible for me to talk about popular music without mentioning probably my greatest mentor, John Lennon. I guess he defined for me, at any rate, how one could twist and turn the fabric of pop and imbue it with elements from other art forms, often producing something extremely beautiful, very powerful and imbued with strangeness.

Also, uninvited, John would wax on endlessly about any topic under the sun and was over-endowed with opinions. I immediately felt empathy with that. Whenever the two of us got together it started to resemble Beavis and Butthead on Crossfire.

The seductive thing about John was his sense of humor. Surrealistically enough, we were first introduced in about 1974 by Elizabeth Taylor. Miss Taylor had been trying to get me to make a movie with her. It involved going to Russia and wearing something red, gold and diaphanous. Not terribly encouraging, really. I can’t remember what it was called—it wasn’t On the Waterfront, anyway, I know that.

We were in LA, and one night she had a party to which both John and I had been invited. I think we were polite with each other, in that kind of older- younger way. Although there were only a few years between us, in rock and roll that’s a generation, you know? Oh boy, is it ever.

So John was sort of [in Liverpool accent] ‘Oh, here comes another new one.’ And I was sort of, “It’s John Lennon! I don’t know what to say. Don’t mention the Beatles, you’ll look really stupid.”

And he said, ‘Hello, Dave.’ And I said, ‘I’ve got everything you’ve made—except the Beatles.’

A couple of nights later we found ourselves backstage at the Grammys where I had to present ‘the thing’ to Aretha Franklin. Before the show, I’d been telling John that I didn’t think America really got what I did, that I was misunderstood. Remember that I was in my 20s and out of my head. So the big moment came and I ripped open the envelope and announced, ‘The winner is Aretha Franklin.’ Aretha steps forward, and with not so much as a glance in my direction, snatches the trophy out of my hands and says, ‘Thank you everybody. I’m so happy I could even kiss David Bowie.’ Which she didn’t! And she promptly spun around swanned off stage right. So I slunk off stage left.

And John bounds over and gives me a theatrical kiss and a hug and says ‘See, Dave. America loves ya.’

We pretty much got on like a house on fire after that.

He once famously described glam rock as just rock and roll with lipstick on. He was wrong of course, but it was very funny.

Towards the end of the 70s, a group of us went off to Hong Kong on a holiday and John was in, sort of, house-husband mode and wanted to show Sean the world. And during one of our expeditions on the back streets a kid comes running up to him and says, ‘Are you John Lennon?’ And he said, ‘No but I wish I had his money.’ Which I promptly stole for myself.

It’s brilliant. It was such a wonderful thing to say. The kid said, ‘Oh, sorry. Of course you aren’t,’ and ran off. I thought, ‘This is the most effective device I’ve heard.’

I was back in New York a couple of months later in Soho, downtown, and a voice pipes up in my ear, ‘Are you David Bowie?’ And I said, ‘No, but I wish I had his money.’

‘You lying bastard. You wish you had my money.’ It was John Lennon.”